What does your dogs bark mean? 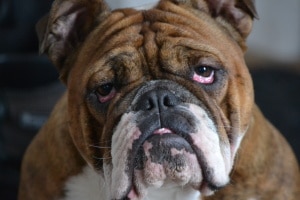 The meaning of pitches: Low pitched sounds (such as a dog’s growl) usually indicate threats, anger and the possibility of aggression. These are interpreted as meaning “Stay away from me.”  High pitch sounds mean the opposite, asking to be allowed to come closer or saying that it is safe to approach. The question is why should dogs, use and understand this Law of Pitch? The answer begins with the simple observation that big things make low sounds.  For example, take two empty water tumblers, one large and one small and tap each with a spoon. The large one gives a lower pitched ringing sound. Obviously a dog does not change his size simply by changing the pitch of his sound signals. So, why would the receiver of this signal respond to these pitch variations at all, since they often do not represent the physical reality? Now here is where evolution and the development of communication begin to weave their magic. Suppose that you are an animal who is sending signals to those around you. Since you know that other animals are paying attention to the pitch of your signals you can now deliberately use that as a means of communication. If you want to make another animal move away, or to stay out of your territory, you could send a lower pitched signal, like a growl, suggesting that you are larger and more dangerous. Conversely you could also use a high pitched signal, like a whimper, to suggest that you are rather small, and therefore it is quite safe to approach you. Similarly, even if you are large, if you wish to signal that you intended no threat or harm when you approached another animal, you could indicate that you intended to act like a small harmless creature by whimpering or whining.