Jack took a queen and now a joker!! 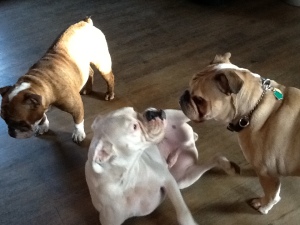 This is our buddy Jack, He came to us a week ago with a few issues of control. He thought he was in control and his owners wanted it back! Jack when he first arrived was quite rude and bad mannered but since the first day Jack has come leaps and bounds, Jack didn’t have any dog friends as he would have rather attacked then play, well as you can see Jack now has some dog friends and he truly likes them. Jack now has eight dog friends and also made many new ones at our local dog park which by the way is his new favorite hang out! Jack also had some issues of claiming things, such as toys, couches and beds and even people, well I am also proud to say he doesn’t do that any more either although he still tries and pushes once in awhile but is quickly reminded that his behavior just will not be tolerated! I am sad to say Jack will be leaving us tomorrow to return home to his anxiously waiting family who I know misses him dearly and I can see why!~ He his a very friendly outgoing kinda guy with a larger then life personality, we will definitely  miss the bones of him when he is gone. Jack will still have some daily work to do so he can maintain the state of balance and although he has come along way still has a bit more road to travel, I will be sure to teach his owners all the ” do’s and don’ts ”  of our boot camp so Jack can have a bright future. Gonna miss ya big guy!!