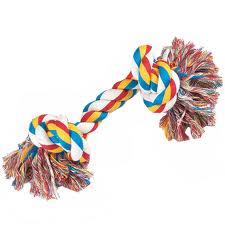 A “foreign body” is the term we use to describe anything other than food that your pet may have swallowed. It can be very complicated to determine whether a particular foreign body will make your pet sick. The most difficult cases of foreign body ingestion occur whenever the pet owner doesn’t know that their pet swallowed something.

There have been countless times when I was amazed at the kind of foreign bodies in the colon captured on X-rays during examination for some other problem. These cases were not affected by the foreign body, they were just coincidental findings that were swallowed and passed without incident. I have seen things like nails, staples, wire, rocks, rubber balls, and even sewing needles.

Obviously, some toys are more dangerous than others as well as some pets are more destructive and likely to swallow a piece of a chew toy. Therefore, pet owners should pay close attention to their pet and decide on an individual basis which toys are right for their pet. Small balls about the size of a golf ball or smaller are never a good idea simply because they are easily swallowed yet too big to pass from the stomach into the intestines.

Many owners ask whether or not raw hide chews are safe. For many dogs raw hide chews seem to be fine, however if a dog bites off a large piece and swallows it, the dog may vomit for a day or two until the rawhide dissolves.

You should never let your pet play with a rope toy! Rope toys encourage pet owners to play tug-of-war with their pet which is not good behavior. Most importantly, if they swallow a portion of the rope, the results are often extremely devastating. Often, part of the rope will pass into the intestines while a portion of it gets stuck in the stomach. The stomach and intestines continues to try to push the rope through thereby causing the rope to mimic a draw-string similar to a pair of sweat pants.

Therefore, a large amount of intestines is drawn into a very tight ball. As you can imagine, this is extremely painful and can cause permanent damage to the intestines. Commonly, the string or rope actually begins to cut into the intestines causing lacerations which are difficult to repair.

Recently, I was presented with a young Schnauzer puppy named Lexi that had stopped eating, began vomiting, and was having pains in her abdomen. Her owners were not aware of anything she might have swallowed. X-rays did not reveal an obvious foreign body.

However, we performed a test known as a barium series. It is performed by giving the patient liquid barium which shows up on X-rays very well. In Lexi’s case, the barium did not move out of the stomach into the intestines showing us that she had an obstruction.

We performed surgery on Lexi to remove a linear foreign body by cutting open her stomach and three places in her intestines. This was an extremely serious surgery that lasted for two and a half hours.

Fortunately, Lexi recovered very well from surgery and is at home being a normal puppy once again.

Unfortunately, many pets that swallow portions of rope toys never survive long enough to have surgery or too much permanent damage occurs.

Sometimes it is impossible to stop pets from chewing and swallowing certain objects. You should be careful with what type of toys you give them to play with. Be especially mindful of the toys they are allowed to have when you cannot supervise them. If you have a question or if you think your pet may have swallowed a foreign object, contact your veterinarian as soon as possible to ensure that your pet lives a long, healthy and happy life.