This is Kate and Matt, about 61 days ago they adopted and rescued a Great Dane, Fiona. Fiona was very, very skinny and malnourished, truthfully she was starving to death. Matt and Kate took on the responsibility of getting Fiona healthy, gaining some weight and even hired me to do some training for socialization, you could say they were doing everything they could to make sure Fiona’s needs were being met. Over the 61 day they had Fiona she was doing incredibly well and even was starting to gain some weight, went to the vets to have her check ups and everything was looking like Fiona was climbing the uphill battle to a happy and healthy new life. Kate and Matt were for the most part first time dog owners and always seeking guidance where Fiona was concerned, they simply wanted what was best for her at all times and their inexperience was met with determination to succeed. 36 hours ago much to matt and Kates surprise Fiona started acting very strange and seemed to be just not quite herself, it was only a few short minutes until Kate and Matt realized what was wrong with poor Fiona, she was not sick, not hurt, nope! Fiona was pregnant and giving birth right in front of their eyes!! Matt and Kate we shocked and dis believing what their eyes were telling them, out came baby number one! Looks healthy and Fiona jumped right into mommy mode and was doing tremendous. Baby two! Matt and Kate are amazed and excited. Baby three! Wow Fiona is a trooper! Baby four, five, six & seven, Matt and Kate are very worried and concerned, they rescued one dog and never intended having puppies. Baby eight, nine, ten and finally eleven!! The reality of what just happened his hitting Matt and poor Kate, ” Oh my god! What are we going to do??” Poor Kate and Matt have no idea what to do with puppies, they have no experience with puppies and realize they are in way over their heads and are scared to death.

Fiona is now worse than she was the day she arrived, skin and bones and so emaciated and is not producing milk, nor are her nipples all working! Kate and Matt are concerned for all the puppies and Fiona and want to make sure everyone survives and stays healthy, and now really realize they are in way over their heads and can not take care of eleven puppies, if they don’t intervene all may die. This is where I came in, I got a call from Kate and went to go see all the new babies and when I arrived I realized what an amazing job they had all done!

Fiona was taking to motherhood and doing her very best with what little she had to offer and Kate and matt looked like they just won the lottery,NOT! The puppies were very small about 1/3 the size they should be but amazing that considering the health Fiona was in that any of them survived at all. I immediately called a Vet who is on the rrruffstart program list and explained what had just happened and that we needed supplies and fast! It was Sunday and without a moments thought the Vet came in and opened his clinic to give us what we needed and answered some very important questions we had. Thanks Dr. Tummon from Moira Vet Clinic!

We get back with our supplies in hand and now the severity of Fiona’s lack of milk is showing on some of the puppies, we need to help and help fast! These poor puppies had not eaten since birth wich was now about 15 hours ago and poor Fiona is trying but her milk simply wasnt there and some of the babies are looking lifeless, time to step in and start making bottles, and make them fast. Fiona appeared to have about five nipples with a bit of milk coming, but not much so we decided that the five fattest puppies would stay with Fiona and see if see can feed successfully and ready to step in if needed, six puppies came home with me to be bottle fed and have a chance at survival. The six puppies have been here about 15 hours and have had three successful feeds, not easy feeds but successful. The six puppies are starting to understand what the nipple on the bottle is, and  what it is for. So far we still have six puppies, vocals are fine as they cry pretty loud when they are hungry and so far everything looks positive and no signs of loosing any at this point. I will keep you up dated on their progress 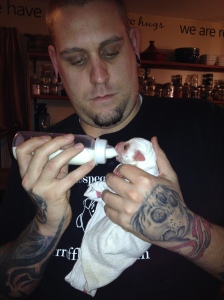